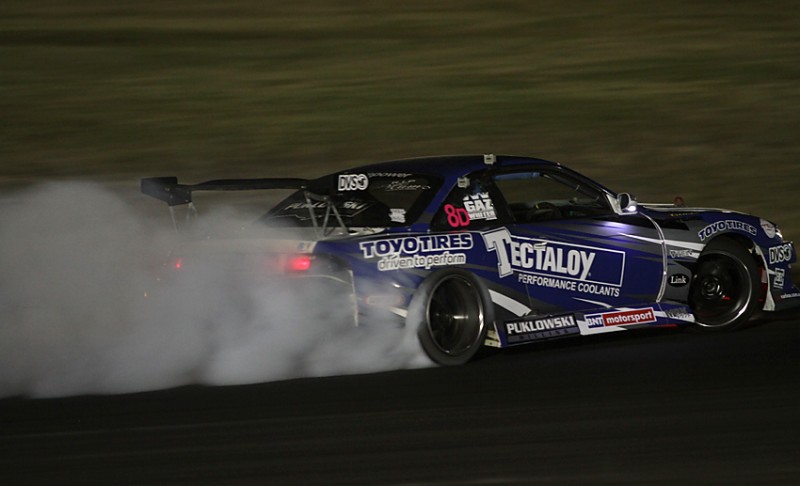 Night 1 is over and out and the new qualifying format turned up some interesting results. With a format change that saw drivers given a one hour period in which they could practice until they felt comfortable to do a single pass to gain a score out of 100, strategy came into play and some perhaps felt the pressure more than others.

Taking the number 1 spot, was the driver who was sitting number 1 after the single qualifying passes, Tectaloy s14 pilot Gaz Whiter. Whiter was fast, smooth and hit the requested line. Whiter has dialed power back and found more grip to create a more useable car.

Position 2 will belong to Suenaga San of team orange who was blazing fast in the Rwd Evo . As he is making an earlier switch between turns 9 & 10 than any other in the field, he will be a tough opponent for anyone come battle time.

3rd belongs to Waiukus Jason Sellers. Amazing result for a guy who only saw the track yesterday and had an up and down D1NZ season. Sellers is again driving smoothly, and is feeling confident.

4th James Abbott aka Jabbitt. Solid in the battle practice, and sitting at 3 after the single passes, Abbott will challenge for a podium after going top 8 last year.

5th Tony Harrison, he will be disappointed with his single run where he was a couple of meters off the turn 10 clip he’d been hitting ruthlessly. Strong battle showing elevated Harrison up the table

6th Fanga Dan, sitting in 2nd after single passes, Woolhouse has fought his car all weekend and managed to find a good single run, before struggling in the battle round

7th Mad Mike. Car issues with no 5th gear and an intermittent problem of dropping onto 2 Rotors at low revs meant Mikey fought hard to grab 7th. I wouldn’t say he would be happy, but he’s in the field and that means he’s in the game

8th Beau Yates. The show wont be content, and did his final run at 160kmh just to show what he could be capable of

14th Cole Armstrong, came to grips with the Hi Tec oils R33 and laid a couple of solid battle runs. More seat time will just see Cole get better and better. Could be a dark horse

22nd Curt Whittaker . Not a happy camp so far. Clutch issues saw the car straighten in battles and a miss appeared every now and then. 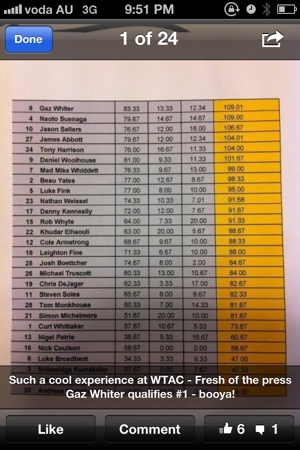