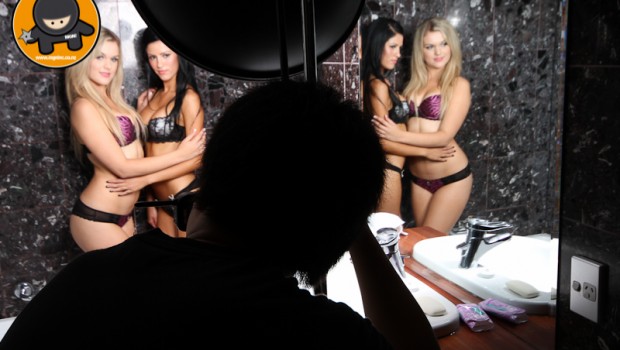 DFimages- Behind the lens with David Fan

When David Fan gave me a call and said “what are you doing Sunday”, I assumed it was going to be our usual conversation about where to go for Yum Cha, and if I’d get sick off the dumplings.  What actually happened however was he said ” I’m shooting some covers for NZPC, do you want to come along?”. Not wanting to appear a raving homer sexual, I of course accepted only for “research” purposes, and what followed was a highly amusing and enlightening look into the world of the photographer and the cover girl. 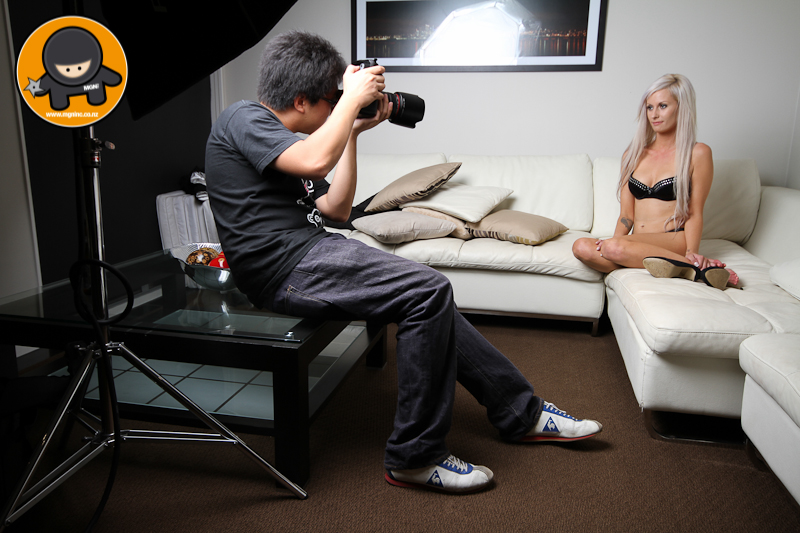 1pm Sunday arrives and I am a little bit rough having just spent 2 days commentating and telling horrid lies at D1NZ, and I realise I have no real idea of what I am actually going to do, how long it will take or even where we were going, I figured though it was a good start to the trip when our first stop was a bottle store followed by ” hey..read this…I need to work out where this Penthouse apartment is”. 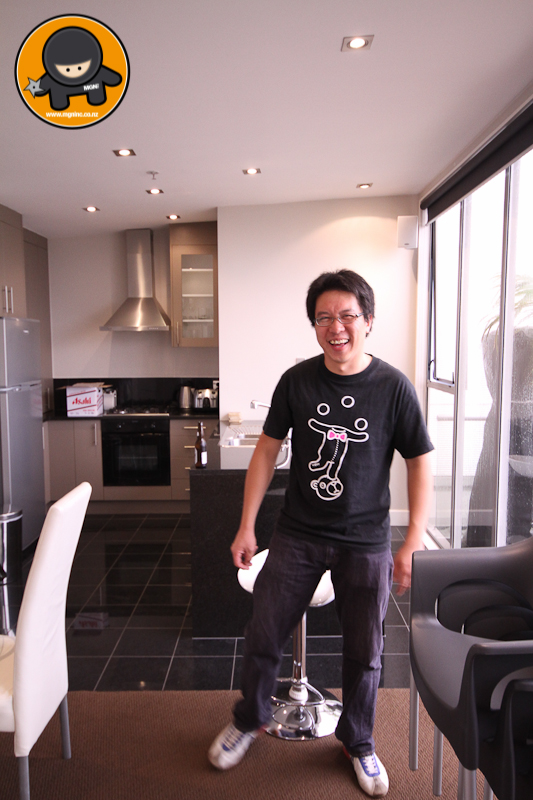 On the way into the CBD, David starts to explain to me what he has planned for the day and we stop briefly to pick up Jesse Gray,who functions as Davids assistant and as I was to find out is the guy tasked with carrying around quite heavy, awkward and expensive lighting gear without damaging it or the surrounding location. He also has to sneak around and not get in shots to get lights on just the right angle to create the best possible image. I have to admit, I never realised before this day, just how much physical effort goes into a shoot, not only from David and Jesse, but the girls also who have to stay posed for minutes at a time and look happy about it. 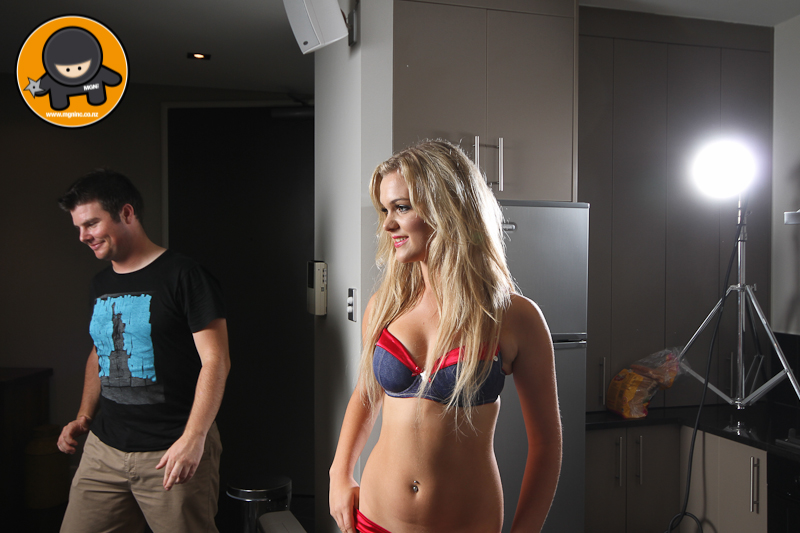 We arrive on site and after Jesse has finished unloading what amounts to more than a decent deposit on a house worth of lights, lenses and Canon 1d bodies, the boys set about trying to come up  with a bit of a shoot plan. This was about the first point in the day where I started to understand what my job was for the day, as we set about trying to mentally image what a photo might look like without shooting it.  Effectively, my job was to be the “consumer” and to try and see what I would want to see on a poster or in a magazine. Fortunately, anyone who knows me knows that I know exactly what I DON’T like….so this made the job a bit easier. 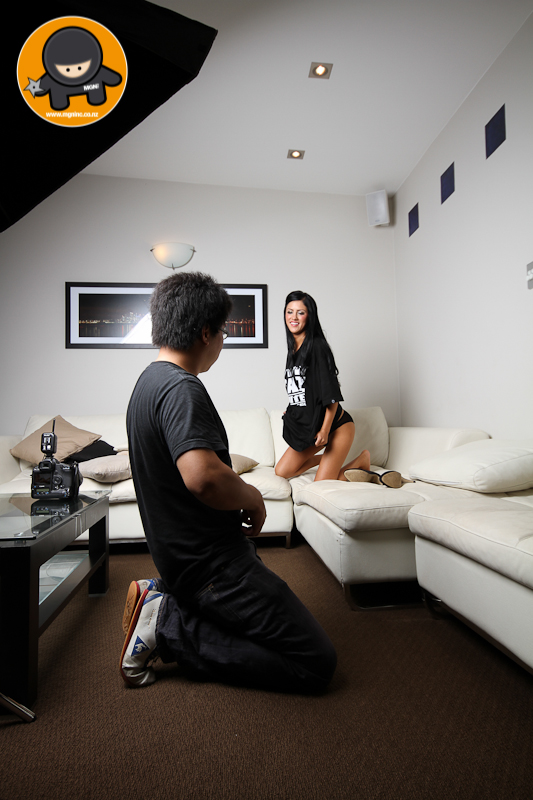 David’s phone rings, and it’s lingerie designer Emma Highfield on the phone. David looks at me and says ” oh…I forgot to tell you, Emma is providing today’s outfits for all 3 girls “.  3 girls you say, hmmm as part of me start to think this is reading like a script for one of those movies you need a credit card  to watch, David wanders off to meet the girls downstairs.

Jesse and I mess around moving some lights around and shooting some quick light tester shots, and the stars of the show appear. Enter  Holly(Sandy Blonde) , Michelle(Brunette)  and Nicole(White Blonde).

At this point, you can feel a change… David Fan disappears a little and “DFimages” takes control. It’s worth reading my initial article on David from a few months back as he prides himself on having the girls comfortable and treating them with respect, which he feels gives the best results, and while I’m writing this article as a light hearted take, it should be noted that there is some artistic license being taken and the models effectively have control of everything they do, and are always treated with full courtesy and care.

The girls are welcomed in and Emma takes them straight to a bedroom which doubles as “wardrobe” for the day.  Chatting with Emma as we wait for the girls to get ready she starts to open the door on her world and trying to prepare  a range for each shoot that can suit each models body type and accentuate their best features, while matching skin tone, hair colour and variety of backgrounds.  It did  sort of make me laugh but also respect just what effort goes into creating a photo shoot when Emma said ” oh…well this is my 4th shoot this week… ”  with a matter of fact tone that indicated to me that long days on set are just part of the job. 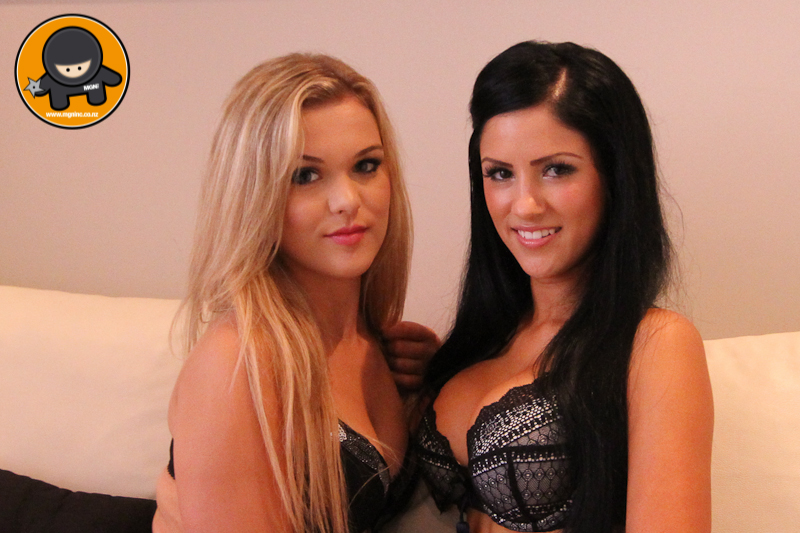 Once the girls were ready,  I got an insight into just how hard David and Jesse work to create a result that works for all the stakeholders. The process seemingly being pretty simple in that each girl would get 4-5 “sets” of images shot, each one in a different setting around our location or sometimes with an outfit swap just for contrast against that particular back ground.  Simple right? well yes except for the moving of lighting, props, and people around the place. Anyone who has ever spent time using a full frame camera with a large lens on it will appreciate just how 7-9 hours might feel,  for context…go and grab a 2 or 3kg bag of fruit and hold it infront of your face and see how long it takes you to get a little tired. 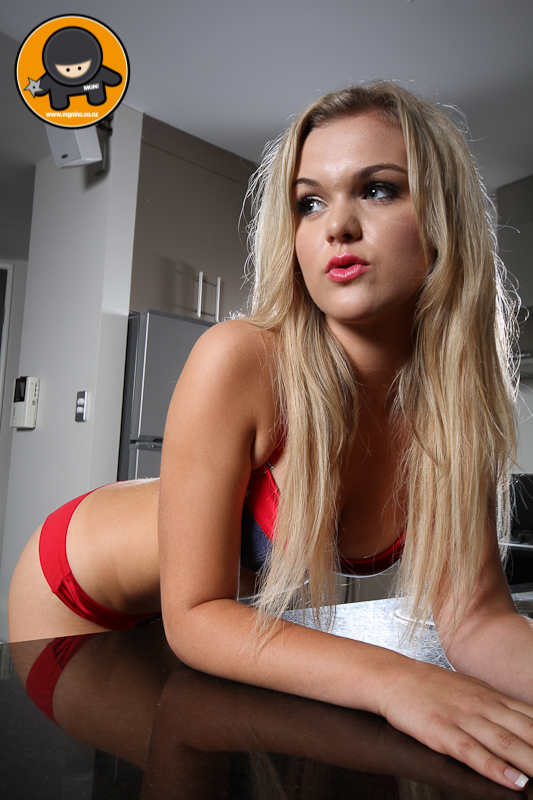 The next 6 hours actually went by surprisingly quickly as we moved from location to location, and I got to spend some time chatting with the girls in between shots. As it turned out 2 of the 3 were actually doing there first ever proper shoots, while Holly had done some previous work but not a huge amount.  This turned out to be one of the more interesting aspects of the shoot, as  David effectively becomes a coach for the girls and teaches them how to pose, or techniques to help hold a pose to minimise the discomfort and accentuate body lines.

Here’s David showing Holly a pose he calls ” how I drive my Porsche” …..he may or may not have been making engine and gearshift noises. 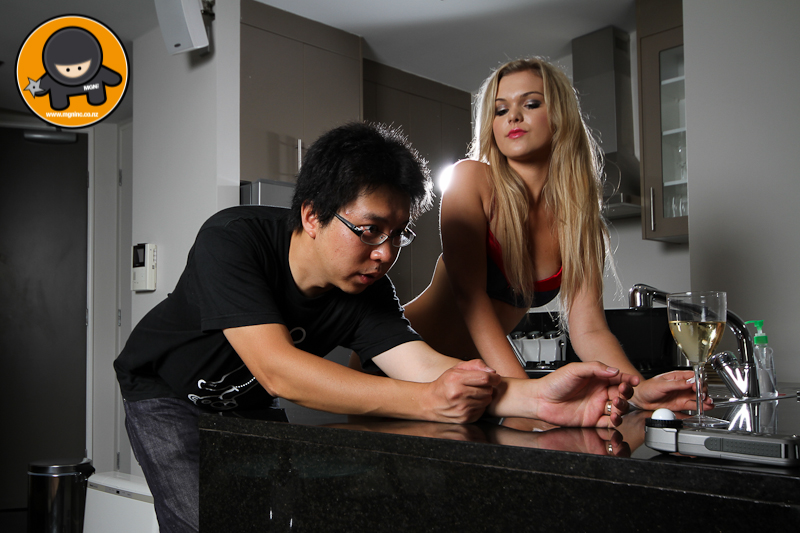 I think most of you probably want to see more images and think I have talked enough, so here are a few images of one of my “concepts” for the shoot which the kind folk at Tyler Street Garage were happy to help up  with.  I can’t actually show you the finished shot as it came out so well that its being used for print , one of the unwritten rules of doing  a BTS is that we  don’t ruin the impact of the purchasers finished product.  I just want to say to, to the lady who was singing at Tyler, you were awesome…and to the tourists who were trying to look without your girlfriends seeing you….good effort lads 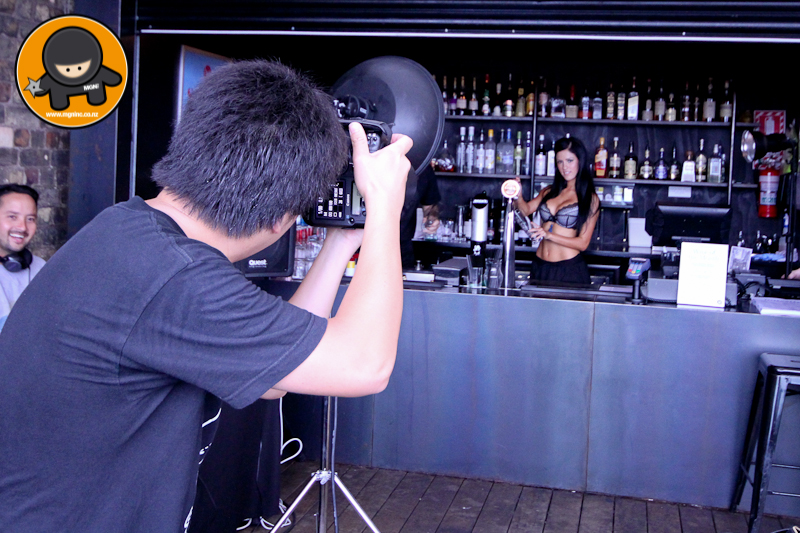 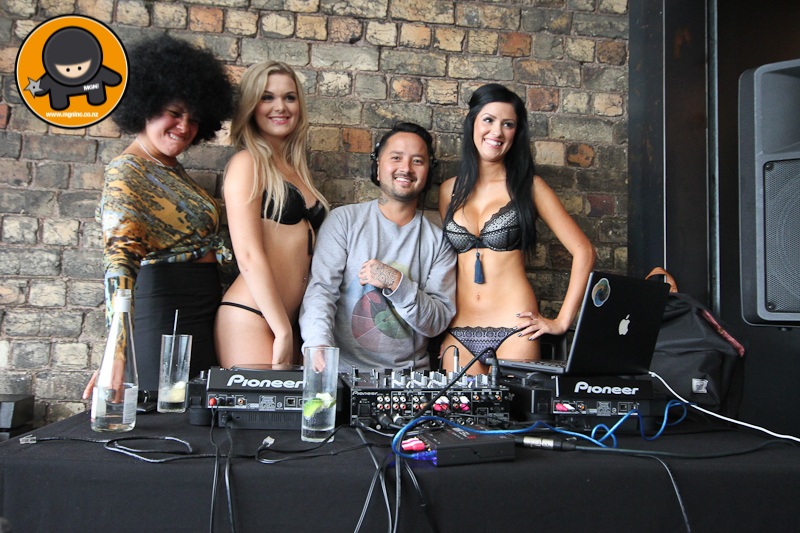 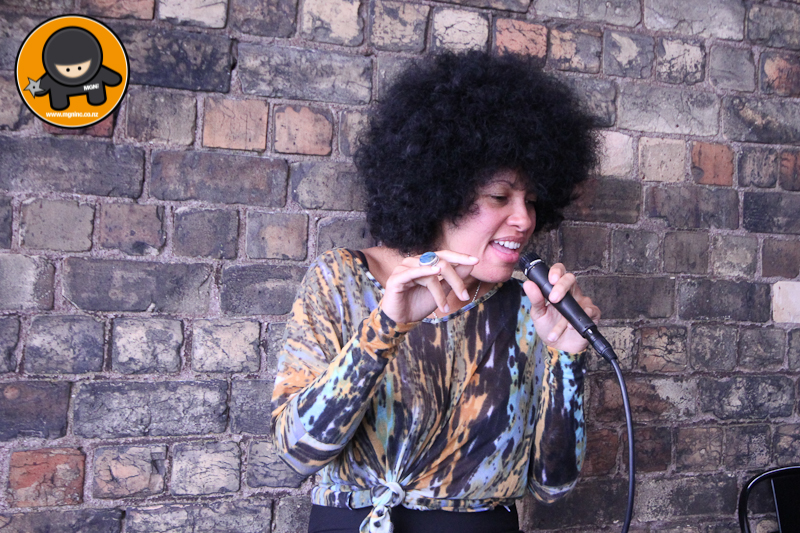 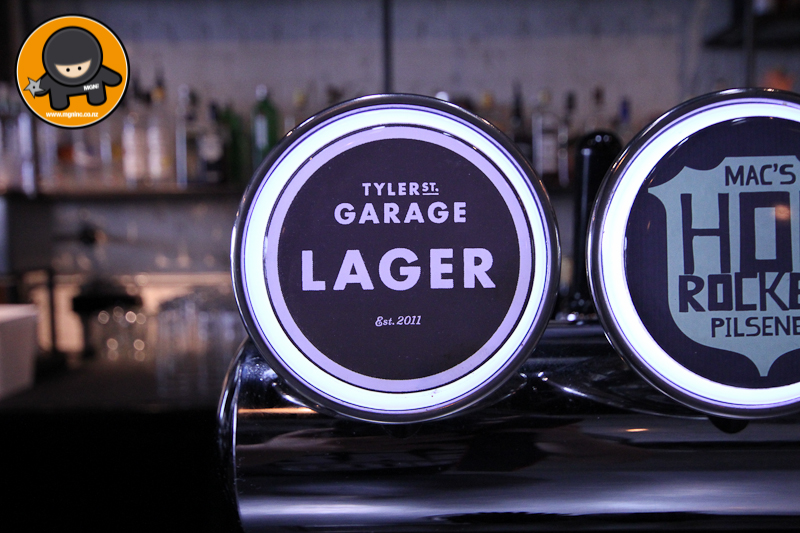 The girls it should be pointed out ran to the bar in heels, and braved what was probably about 8 degrees  to get those shots, who said it was easy to stand around looking pretty huh? Speaking of pretty, this next image is perhaps not so much, but is what happens when 3 time drift champ Gaz Whiter finds out what you are doing and decides he wants a promotional shot for his new T shirts. (sorry to anyone who goes blind) 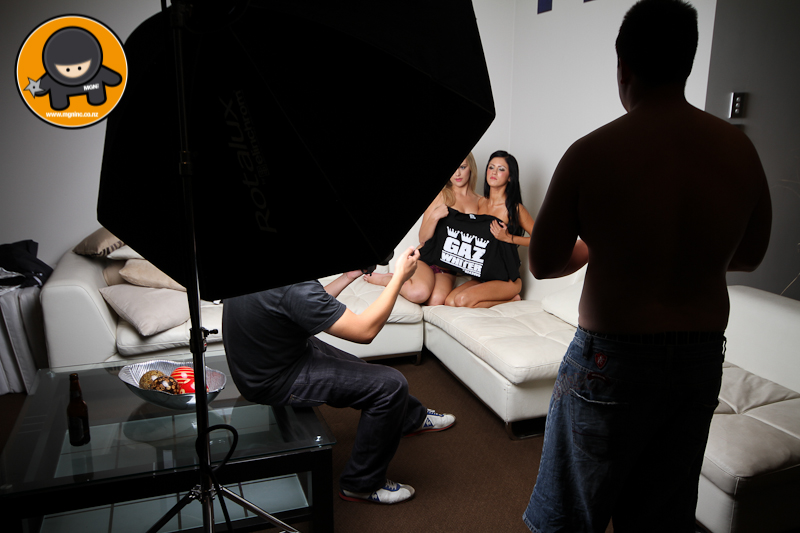 In between shots, the girls had a bit of  a snack . Lesson for the day….do not get between hungry girls and a snickers bar, you may loose a finger or get a fingernail to the eye. You should have seen what they did to the bag of M&Ms…..unless that was Jesse and he just blamed them. 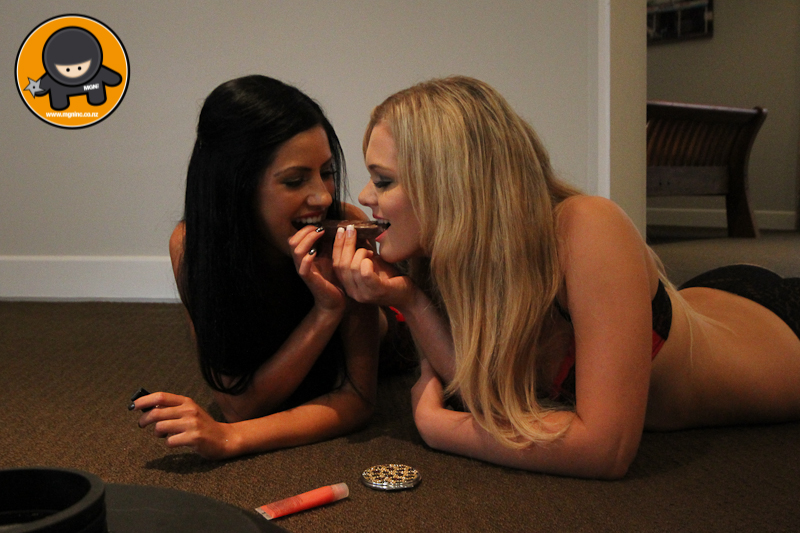 Holly and Michelle were happy to have a little fun during the shoot and filmed some spoof promo videos for David, NZPC and Emma Highfield, which I will attach a sample of at the end. By relaxing, the girls tend to get better shots, which is important in a game where there is considerable competition and many will work for free hoping to get noticed. 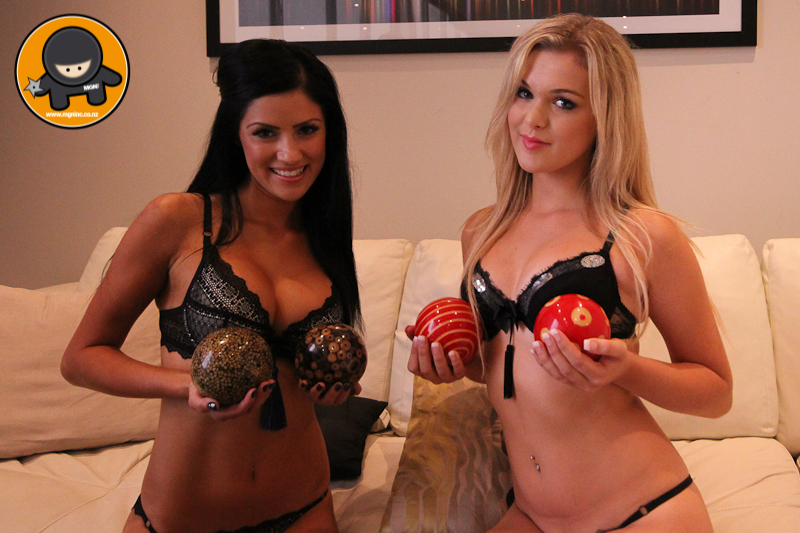 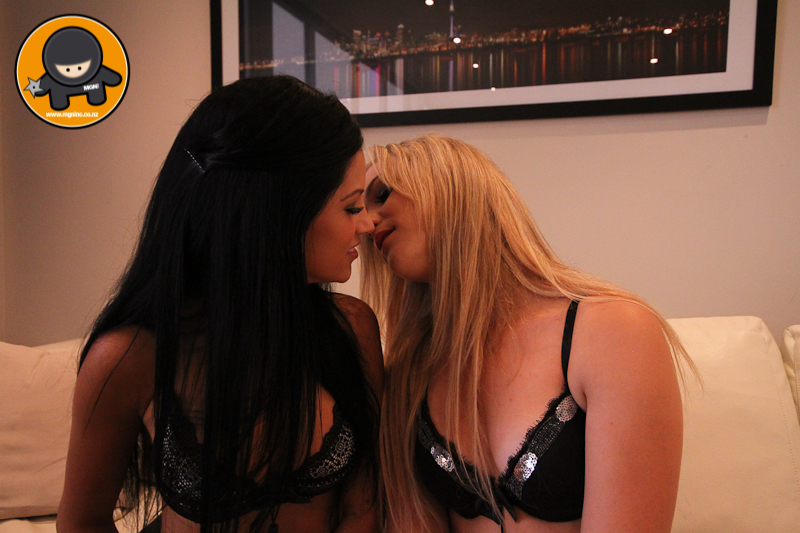 After 7 hours on site, plenty of laughs, several hundred photos and 4 outfit changes per girls. It was time to finish up for the day as the idea of being told how to stand, when to smile or pout and turn this part of your body left and the other part right started to lose its novelty. One final shot was done , and it was time to pack away all the gear and enjoy a well earnt beer ( for David that is..I stayed well hydrated all day) 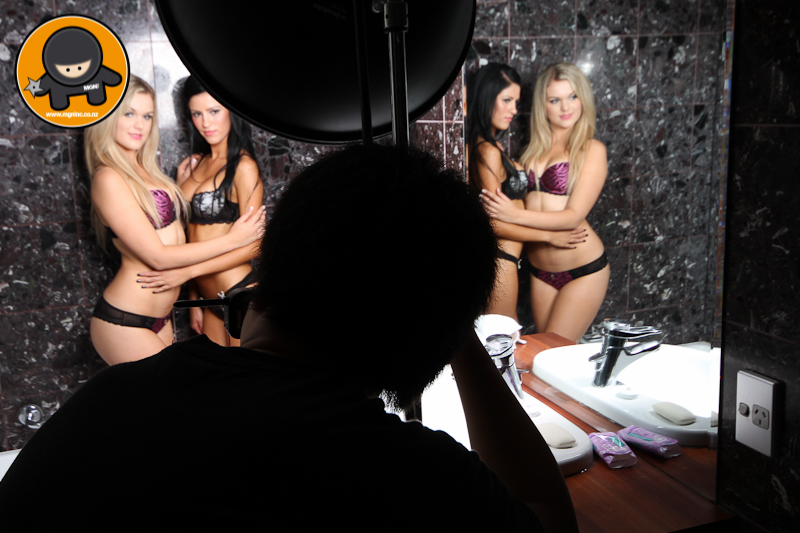 I’d like to thank David Fan for allowing me to be a part of the day, Emma Highfield for suppling the Lingerie, NZPC for ordering the shoot and providing the location, Jesse Gray for carrying things meaning I didn’t have to, and Michelle, Holly and Nicole for being good sports about the whole thing. Hopefully this gives you an insight into just what is behind those photos you see in magazines.