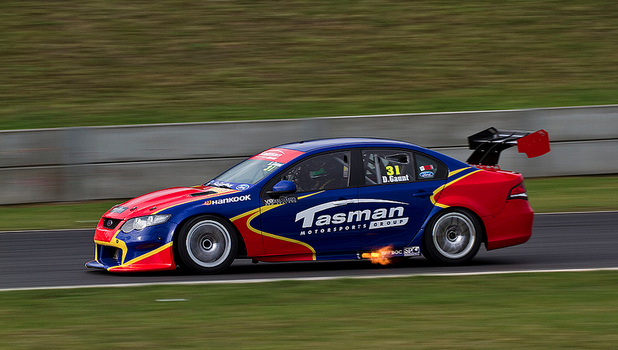 V8 Supertourers Round 4- Race to the sprint round title

The inaugural sprint championship of the V8 Supertourers, New Zealand’s freshest tin top race series, drew to a close on Queens Birthday weekend beneath gorgeous skies over the undulations of Hampton Downs motorsport park.  A grid packed with 17 of New Zealand’s fastest Fords and Holdens (well… lookalikes at least) promising a spectacle combining colour, noise, close racing and of course at the end of it all, a driver to crown champion of the 4 round sprint race series. Series leader Jonny Reid at the helm of the International Motorsport FG Falcon came into the round carrying a narrow 38 point lead over multiple BNT V8 champion John McIntyre also piloting an FG Falcon, under the JMR banner.

Following the previous rounds, a couple of widely publicised and notable changes to the grid appeared for the round. Firstly, the Tasman Motorsports Group had entered an FG Falcon for Daniel Gaunt, while the General gained further representation on the grid courtesy of Angus Fogg, another who’d jumped ship from the BNT V8’s to buckle up behind the wheel of the Hydraulink backed VE Commodore

Saturday morning brought the  20 minute qualifying session, all 17 drivers taking their cars to the limits of adhesion in pursuit of the clock. Conditions were clear, albeit slightly cold and even though the track was reputedly not holding a great deal of heat, times were quicker than the Round 1 appearance of the V8 Supertourers at Hampton Downs, with young Aussie Scott McLaughlin taking the top spot with a lighting fast 1:03.829 seated in the number 93 Supercheap Auto Racing VE Commodore.

Series leader Jonny Reid filled the second of the front row spots on the grid, with a 1:03.918 and being the only other driver to dip below the 1:04 mark in qualifying.

Andy Knight brought the Century Batteries/Gulf Oil Falcon home 3rd with a 1:04.181 to round out the top 3.  Unfortunately for McIntyre, his challenge for the championship took a slight blow (literally) as he kissed the armco, and qualified 9th after experiencing related steering problems. Dominant Round 1 winner and perennial crowd favourite, Greg Murphy managed one place better with 8th spot for the Mike Pero sponsored m3 Racing VE Commodore.

Race one saw Knight grab an early lead after taking the holeshot from row two on the rolling start, as McLaughlin slipped back into second position. Knight would later spin while fighting for 5th with McIntyre, in an otherwise clean and fuss free race. McLaughlin would go on to overhaul Knight to take victory in the opener for the weekend, with Andy Booth taking a hard fought 2nd (on his birthday no less!) with Jonny Reid bringing the flame spitting Falcon home to a crucil 3rd place to not only occupy the bottom step of the podium but also remain ahead of his nearest challenger for the sprint championship.

Further down the pack, Fogg and Gaunt placed 13th and 14th respectively in the new cars, clearly taking some time to adjust to their new machines

The penultimate race for the championship on the Sunday once again saw McLaughlin overtaken when the lights turned greentart – this time Booth took the reins from row 2, with the black and yellow Commodore streaking away to create a significant early buffer. This was all undone by a safety car – one of 5 during the 25 lap race – and although Booth managed to pull ahead following a couple of the restarts, McLaughlin’s car appeared to have better speed in the latter stages of the race, eventually overhauling Booth to take the victory and set the quickest lap of the race with a 1:04.383. Reid’s International Motorsport Falcon suffered mechanical failure and ground to a halt between turn 3 and 4, as McIntyre capitalised and drove a steady race to 3rd place. Youngster Andre Heimgartnet deserves a mention here, with the teenager piloting the Pink Batts/Superlux Commodore to a creditable 4th spot.

Kayne Scott continued a dreary weekend, with damage sustained to the Peak Commodore at Turn 4 after a collision, forcing cars to take evasive action.

Overcast skies beckoned as the cars lined on the grid for race 3 – the championship decider. Again, Booth proved the superior starter and took the early lead from McLaughlin. However, the safety car once again put paid to Booth’s lead allowing McLaughlin the opportunity to overtake and continue to his third win of the day. Behind the top 2, Murphy drove a steady race to come in 3rd while Reid fought hard to overtake Heimgartner (once again driving a very noteworthy race!) and claim the 4th spot. But what of McIntyre…? Defending solidly from Paul Manuell’s Orix backed Commodore, McIntyre steered the Falcon to 8th place by a mere 0.2 of a second, and more importantly claiming the inaugural V8 Supertourer championship by only 2 points from Reid with V8 stalwart Murphy filling out the top 3.

A final say must give credit to the V8 Supertourer organisers and competitors, with a thorough marketing campaign, a stellar line up of big name drivers and some class machinery the series has breathed some interest into the status quo of New Zealand motorsport. We’re looking forward to seeing the grid grow, and seeing how the big sedans fare in the upcoming endurance rounds… see you trackside.

For full image galleries please see here for and here for