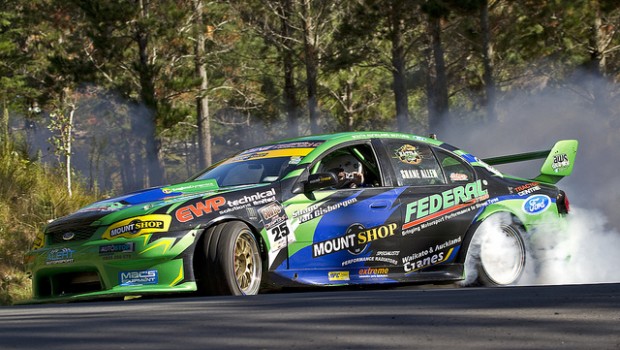 Towards the end of March, Rod and Shelly Millen hosted the 2013 instalment of possibly (in this humble motorsport geek’s eyes) the single greatest motorsport event of the season in NZ – The Leadfoot Festival. Much has been written about this festival (including by yours truly) so I’ll keep it brief. Participants are invited to tear up the 1.6km “driveway” of the Millens Hahei property, the Leadfoot Ranch. This is a driveway designed by a racecar driver – off camber corners, blind crests, aggressive switchback hairpins and hefty inclines, it compiles all that’s needed to challenge even a the seasoned race driver. Typically, the list of invitees includes an extensive, and impressive range of classic and historic racing hardware, ranging from Rod’s apparently unbeatable Pikes Peak hillclimb Celica (only a mere 1000hp at sea level), through to some of the locally created “Specials” that were a feature of New Zealand racetracks throughout the 1950′s through to the late 70′s and slightly beyond.

Bucking the trend this year, drifting made it’s first appearance at the Festival, in the shape of none other but the Rattla Falcon team, with Shane Allen taking the reigns of the big sedan and embarking on the spectacular mission of hurling it up the driveway… some would say shaking up the “established” attendees of such an event (and I mean this with all due respect) but definitely opening some eyes and providing a glimpse into what is quite possibly New Zealand’s fastest growing motorsport that I’d almost grant most spectators present would never have had the predisposition to head out and see for themselves.

And what a spectacle it was, from the first flick through the right hander after the bridge, Shane and the Rattla showed fine form with the prodigious roar of the bent-8 resonating throughout the valley. Standing on the sidelines, murmurs of strained approval began to filter from the mouths of middle aged jokers in flatcaps (no… not flat peak caps) once the Falcon got amongst the trees and generated those trademark plumes of smoke under power as the bellowed from hairpin to hairpin. I’m lead to believe that some were so infatuated with the Saturday performance, that during the evening auction for rides up the hill, the boys decided to throw a lift to the top in the Rattla up for grabs, subsequently achieving a higher total than a gentleman with a fairly rare and legendary supercar from the prancing horse stable…

One Response to New Heights for Rattla Motorsport