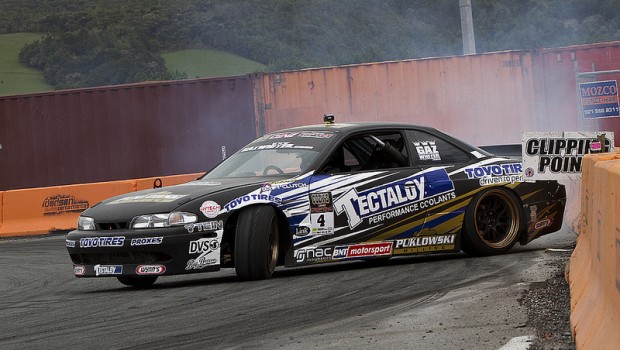 Published on December 5th, 2012 | by mrgrumpyninja

Home town rounds are always special for the Gaz Whiter Tectaloy drift team, and with this being the first time many friends and people from the community who have been long time supporters would see the new LS2 v8 powered S14, it was fair to say that hopes and expectations were high to put on a strong performance.

With a special invite to check the circuit out for safety and be a guinea pig along with team mate and fellow local ‘Fanga’ Dan Woolhouse, the team got an early look at the never before seen purpose built track and were immediately feeling good about chances for the weekend with the car performing faultlessly in a handful of test runs for D1NZ and Toll staff.

Come Saturday the Northland sun was out in force and the team unloaded a stack of fresh Toyo rubber and set about warming up the 350kw of V8 residing in the engine bay. The first day is always about testing and finding limits and that is exactly what Gaz did with his first being near text book and gliding along the wall hitting the clipping point signs as he went. Lap after lap the car would do exactly what it was designed to do and prove that the move to a V8 over the high strung 4cyl was the right one. A tiny issue would raise its head when a flaw in the brake master cyl developed and fortunately team sign writer Jerry ‘Big Brown” Hunt was 2 minutes away from replacement parts and was soon on his way north with a new Wilwood unit. Minor over night cosmetic repairs and a quick adjustment to the Xtreme Drift Clutch and the car was left alone to await a day of competition punishment. 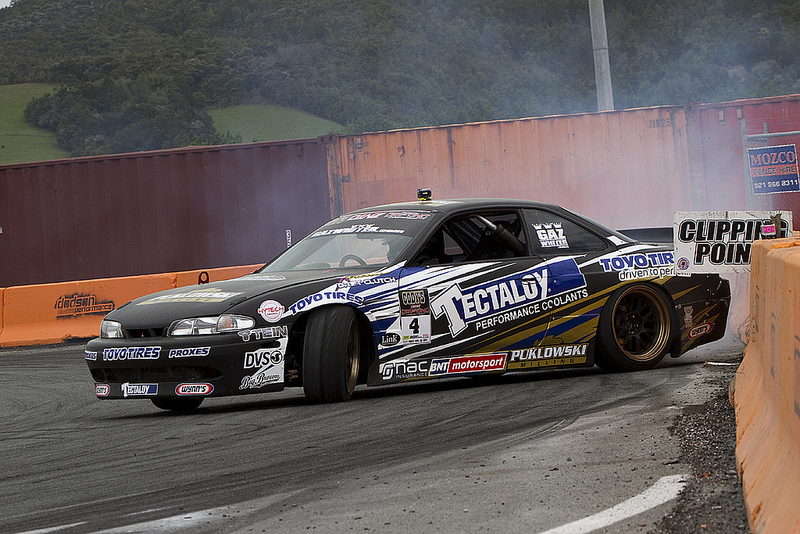 Sunday Morning arrived with a repeat of the fierce Northland sun, which mean only one thing, a hot sticky rubber coated track would await the Tectaloy team. With only a couple of practice laps to be done before qualifying, Gaz made the most of the opportunities to practice battle lining up top rated drivers.

Qualifying in reverse order of last seasons finish as always, Gaz would run 4th from last and was immediately out on the wall and accelerating hard looking to set the bar high for his competition. Runs of 82 and 84 would normally be good for the number 1 spot, but that would go to fellow Driftcorp team member Fanga Dan with an 85. The 2nd place qualifier result good enough to send Gaz straight to the top 16 with only 27 cars present meaning a number of byes in the top 32. Importantly this also gained 10 value championship points.

Sky Zhao in the 2degrees 350z would be Gaz’s opponent in the top 16, and with Sky struggling to get traction Gaz went for an aggressive lead run and created a gap that Zhao couldn’t close, before setting sights on the rear of Zhao’s car and delivering a comprehensive chase that left little doubt around the winner. 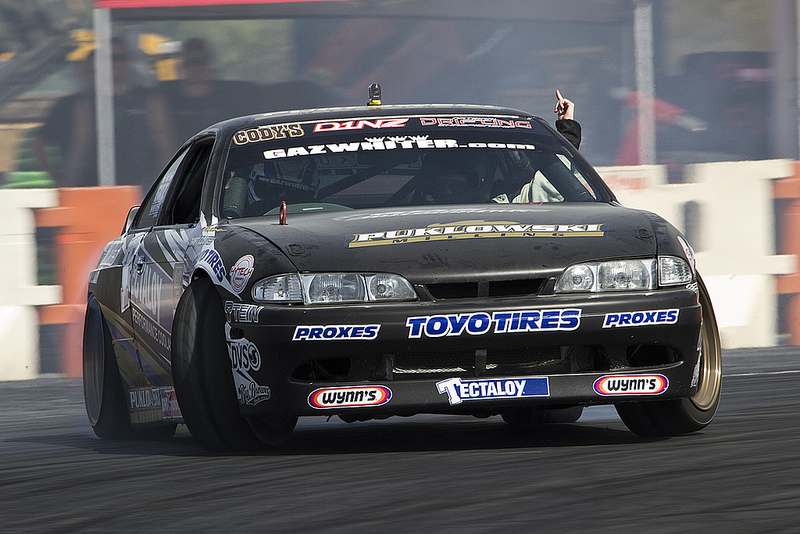 Up next would be key title revival and current Title holder Curt Whittaker in the Autosure R34 Skyline. Having met a number of times in the past no one is ever sure of who will come out on top and this battle again would be one for the books, but perhaps not for the reason expected. Whiter as the higher qualifier would lead first and delivered a solid run while Whittaker made a couple of mistakes that saw most scoring the run 6.5 – 3.5, which meant all the pressure was now on Whittaker to deliver. Into the section both would go with Whiter mere centimeters from the rear of the black Skyline, sitting right on the rear through turns 1,2 and 3 on the switch back to exit the drift section contact was made sending Whiters bumper flying and then Whiter would spin. What caused this is still a matter for debate in the minds of many, but the result would see Whittaker go through to the top 4 and the Tectaloy team were done for the day.

The team were very disappointed, and had wanted a home win for the long time fans, but will move on and focus on upcoming events and some much needed Xmas R & R

As always, Gaz Whiter Drift thanks our loyal supporters -