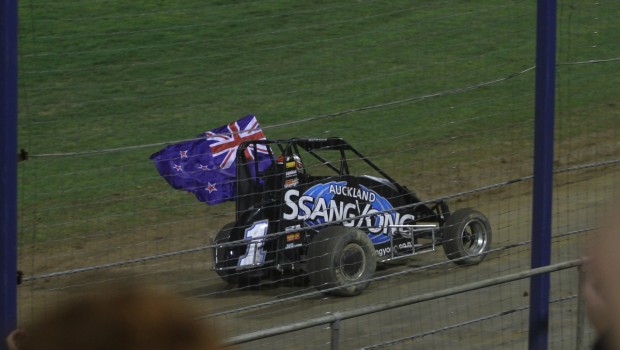 Published on January 6th, 2012 | by mrgrumpyninja

It’s the biggest night of the season, the one the drivers look forward to and build their campaigns for,  the race that brings the visiting superstars down under to ply their craft for willing and eager car owners. This…is the 2012 World 50 Lapper at Western Springs.

Thursday Jan 5th and the flag drops after time trials, A & B mains and more than a little carnage in the TQ section. 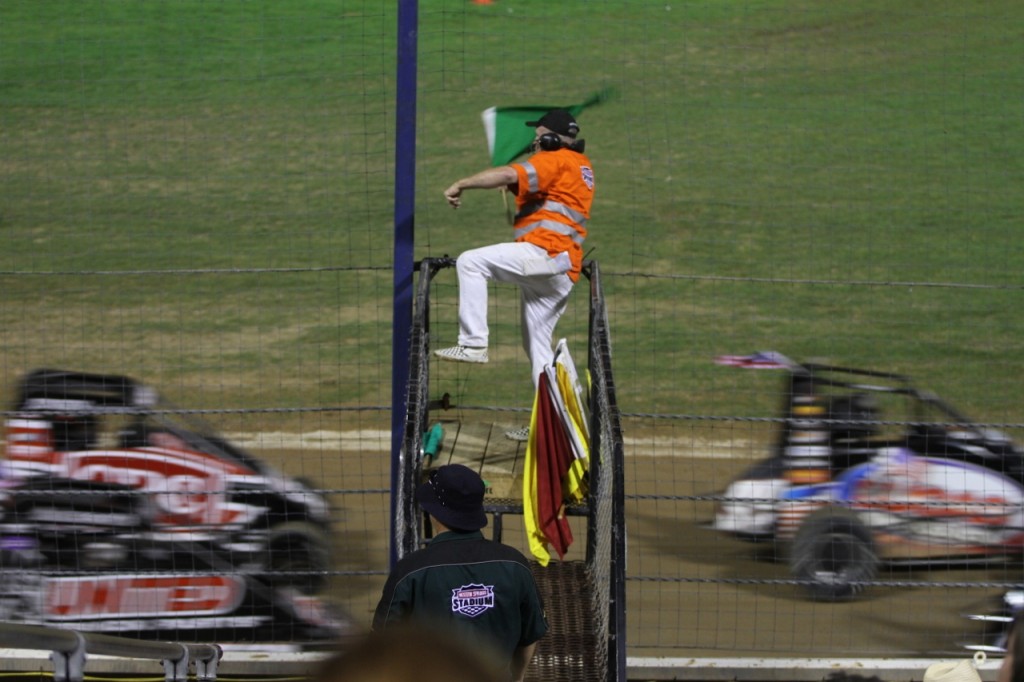 With the way the day was forecast to be, you would have been forgiven for thinking in the morning that racing might not take place, but as the sun went down, the temperature stayed warm and the action on the track was fast and furious. 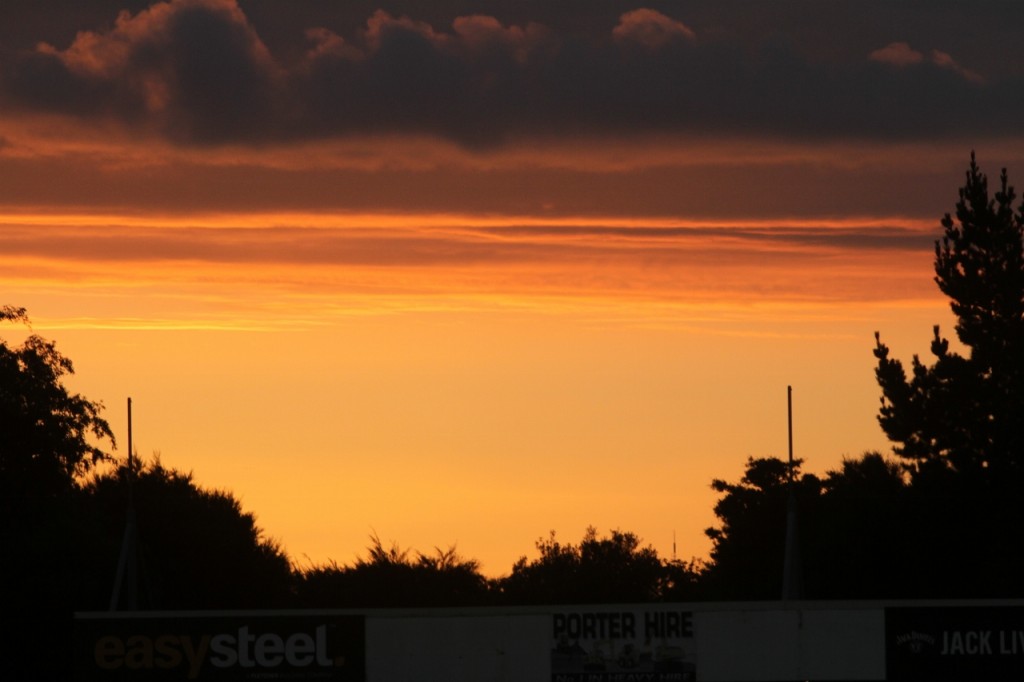 The evening started off with a TQ heat which saw a number of stoppages including monster incidents for #41 Jared Taylor and #6 Kerry Binstead,  Taylor looked to be fine after his incident however his car wasn’t , and Binstead had a to take a trip in the ambulance and many noted that he appeared to move around a lot in car during the rollover. 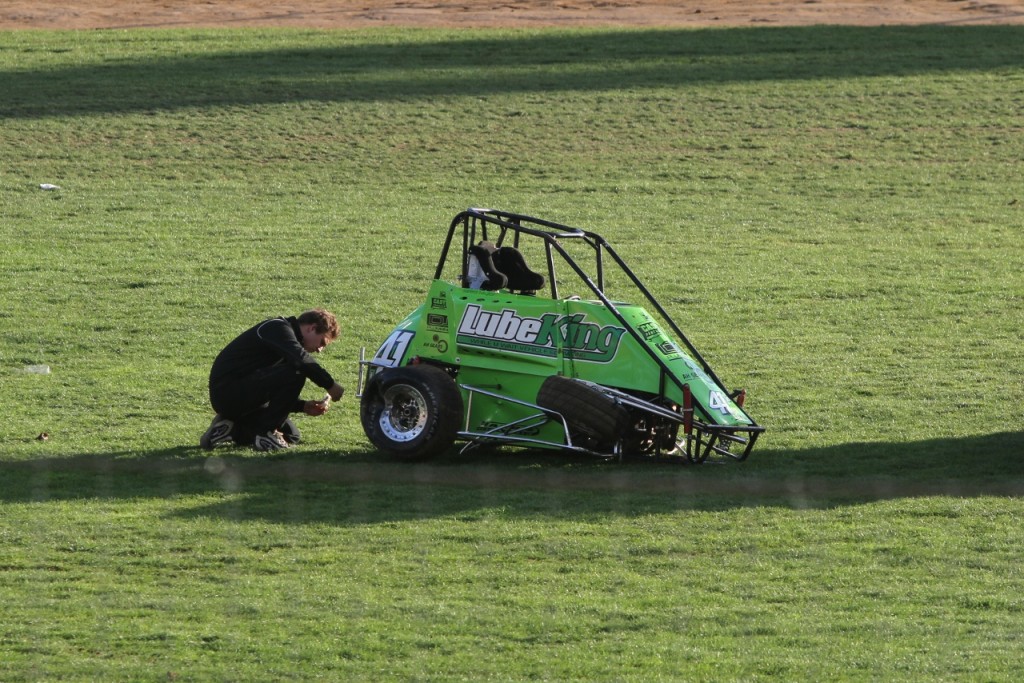 Then it was into the single car time trial format where in pairs the cars were released to set a single quick lap which would place them in the A or B  dash, to set spots 1-16 on the grid for the feature. 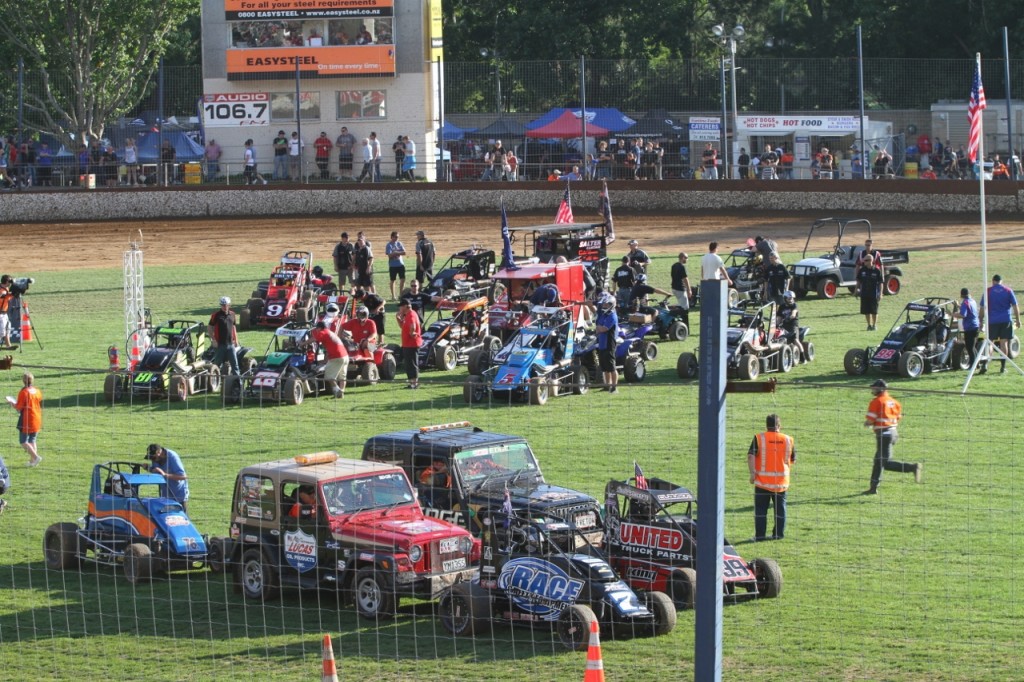 The star of qualifying was American and winner of Tuesdays 40 lap KOTS race, Bryan Clauson, who took the #1 spot and the lap record that was held by Brad Mosen, scorching around the oval in a time of 13.40 seconds. 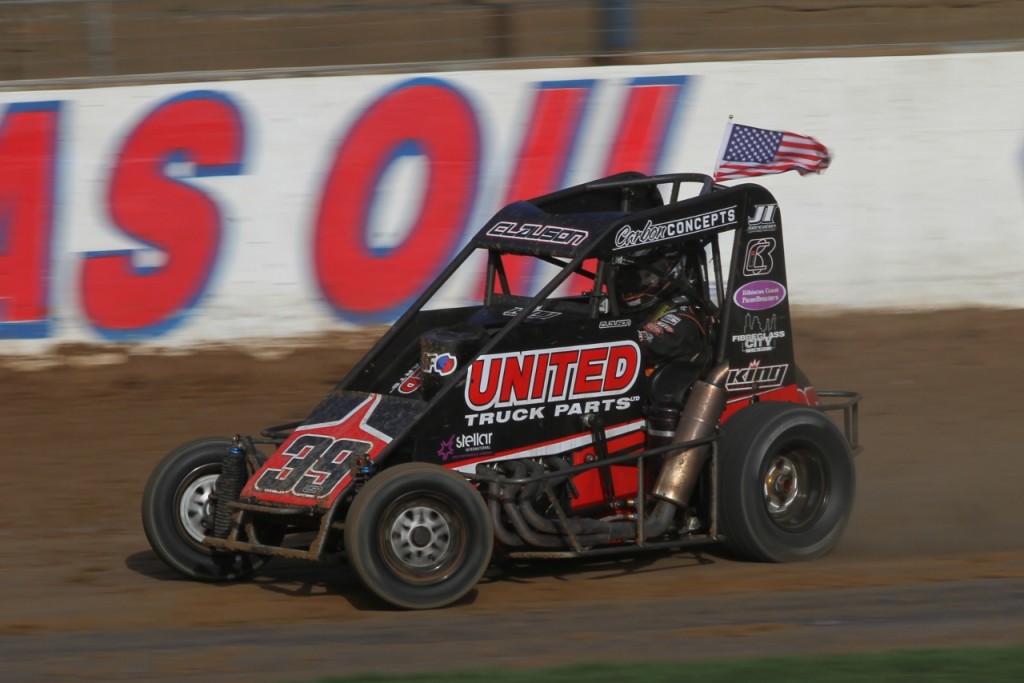 The top drivers it should be noted are real professionals and their offices are on 4 wheels, which you can see in the pits where they seem calm and relaxed, while other drivers are busy self crewing cars or dealing with family etc. 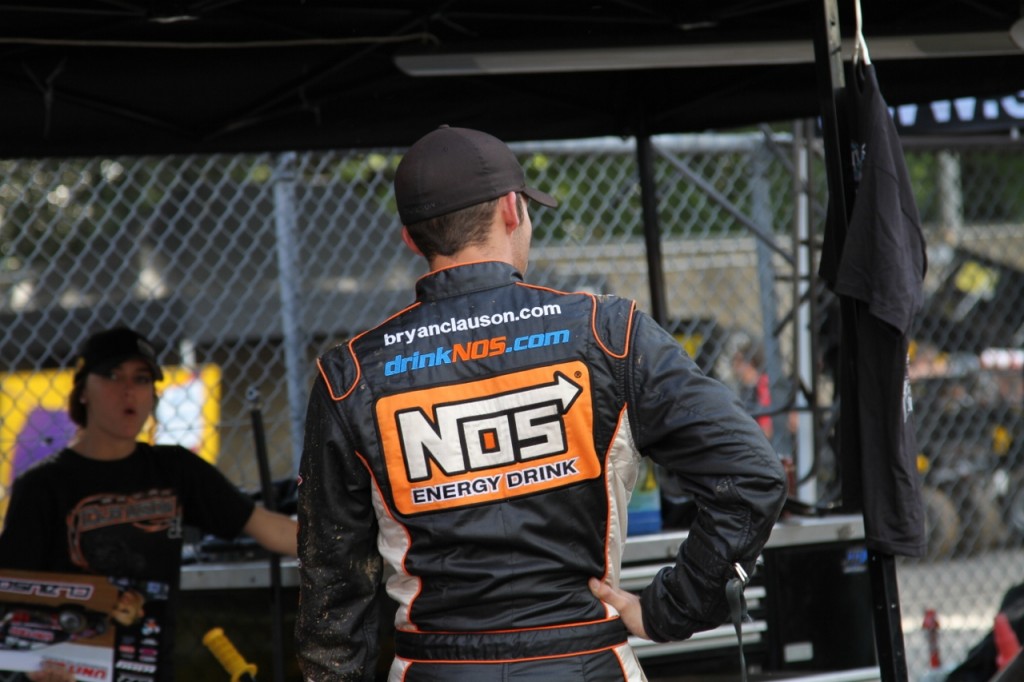 Into the A & B Main Dash’s, which set grids 1-8 and 9-16 respectively, and it was clear the many drivers were holding a bit in reserve not wanting to throw away a start in the big race. It would be young American Kyle Larson who would grab the pole spot, showing the talent he has developed since he began racing at age 8. 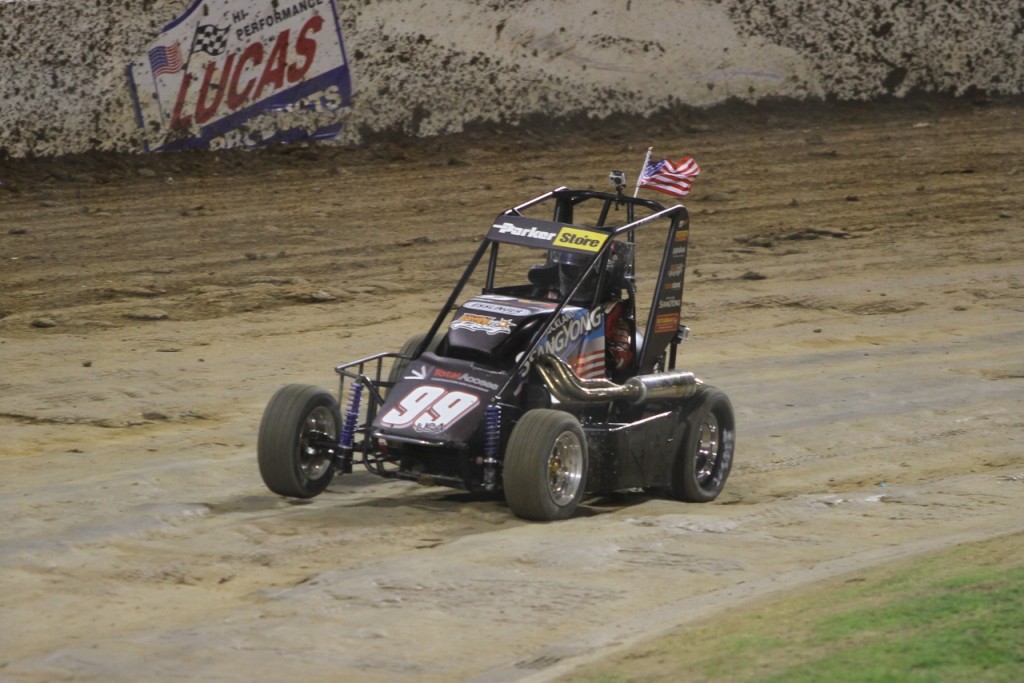 The flag drops and we are underway for 50 laps of action, with 1NZ getting the jump and getting out front of Clauson and Larson

The race itself produced a limited number of incidents, with #2nz Chris McCutcheon tipping over as did #73n Neville Basalaj, while Jerry Coons Jr who had looked to be on a charge lost a cyl and retired, followed a short time later by #1USA Kevin Swindell.  Neither driver seemed to have a happy campaign this year, which might produce some interesting driving on Saturday night during the 30 lapper. 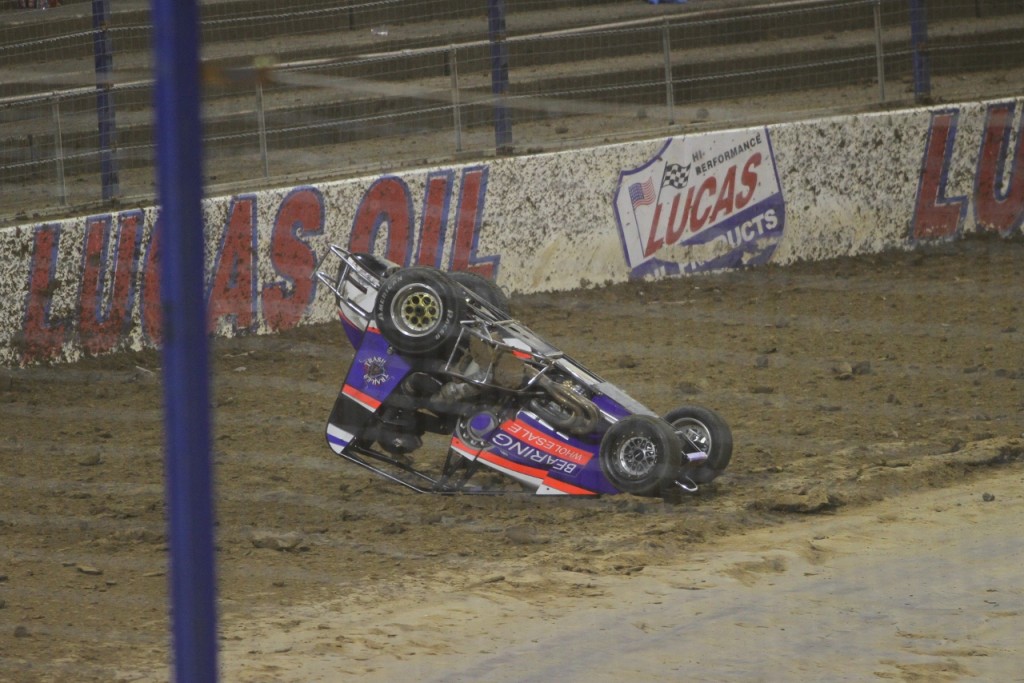 Back in the pack, Nathan Smee and Hayden Williams were big movers without quite reaching the race leaders, however the race belonged to Pickens, Clauson and Larson, and once Larson found that he couldn’t make ground running slightly higher up the track it would seem that the Kiwi champ needed to simply stay clean and he would take the race. Clauson tho had other ideas and from the final restart with about 11 laps remaining really put the heat on the #1nz Auckland SSangyong machine, running tight on the town bend pole line and it seemed that laps simply in the end ran out with the crowd going nuts as Michael Pickens took another well deserved 50 Lap win. 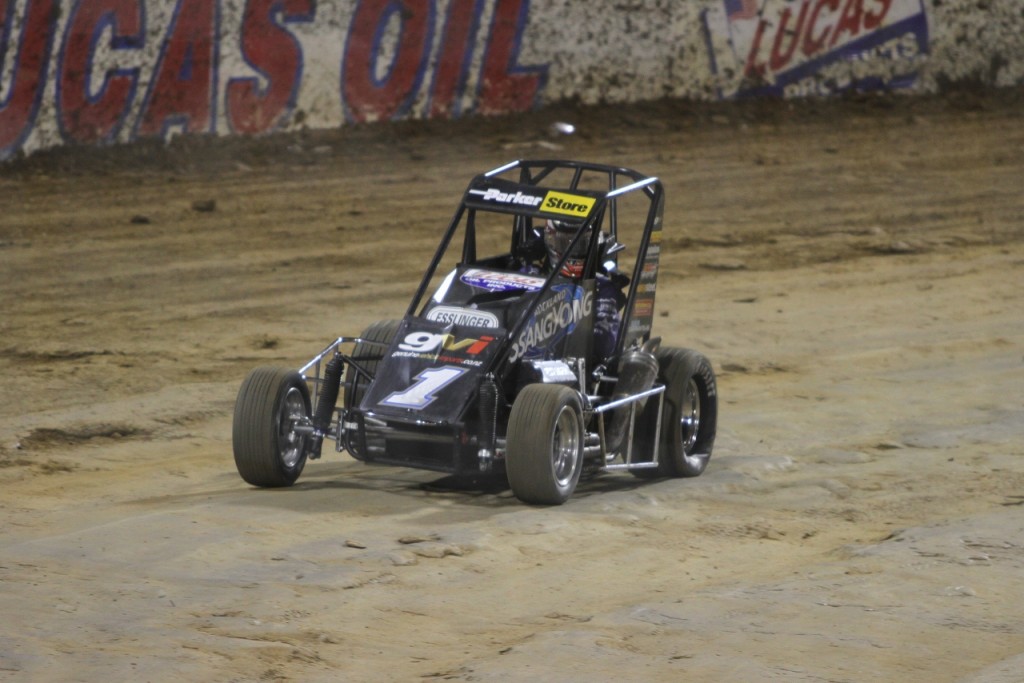 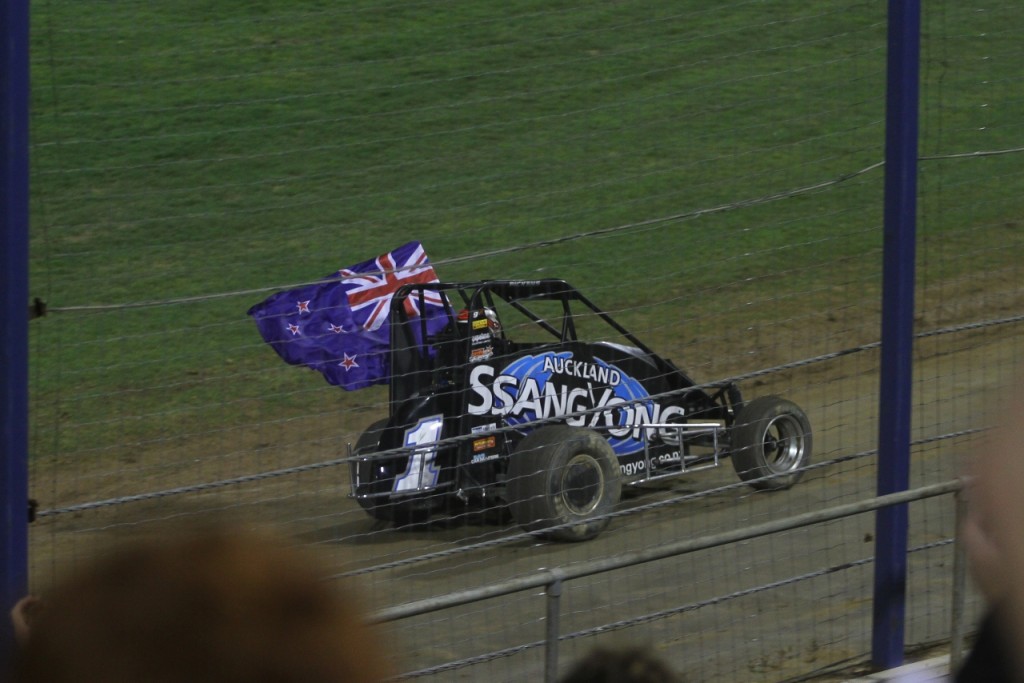 Before jumping out of the car to a huge reception from the big crowd and being greeted by an over the moon crew. 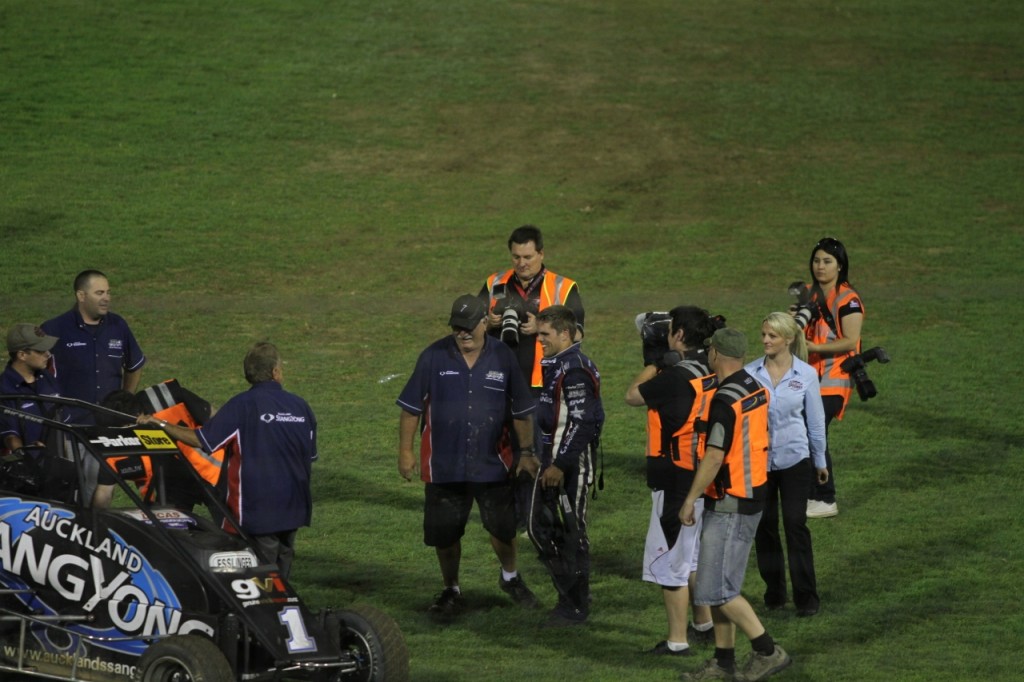 Congratulation to Michael, his team and all the sponsors involved in the car. Pretty good way to get ready for the Chilli Bowl